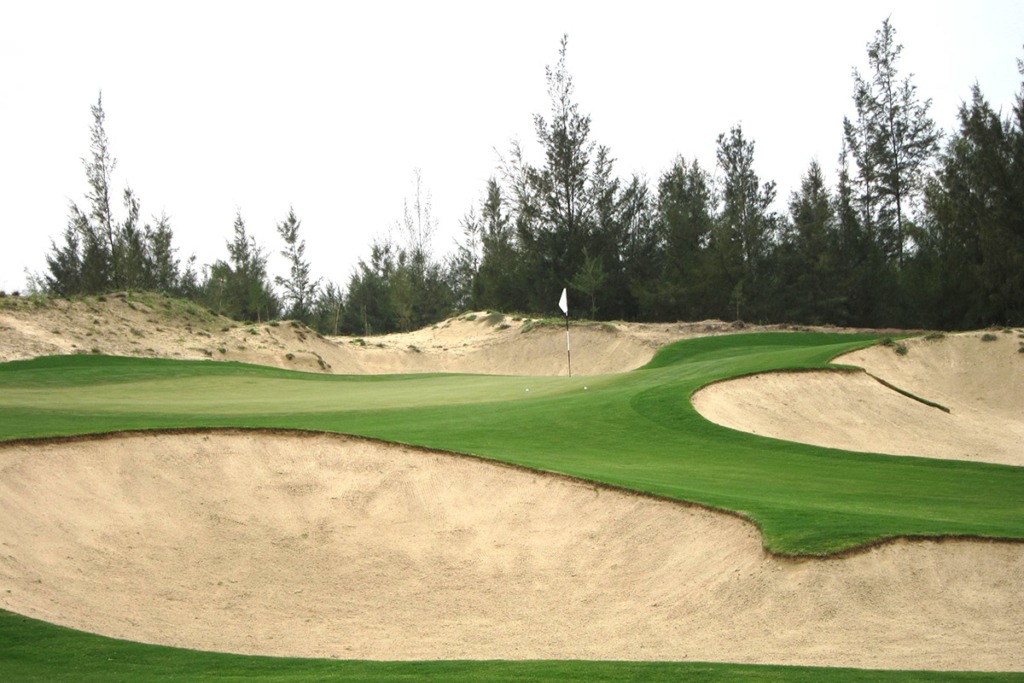 Danang, Vietnam, May 9, 2012 — A friendly, but earnest tussle has emerged between two courses located side by side on Vietnam’s central coast for the mantle of best golf course in Vietnam.

Last December at the Asia Pacific Golf Summit in Thailand, Montgomerie Links near Danang was named as Vietnam’s number one layout, while its neighbour, Danang Golf Club, was declared best new course in the Asia Pacific region.

The same choices were made late last year at Vietnam’s own golf awards, conducted by Vietnam Golf Magazine.

Now, one of the world’s leading golf magazines, US Golf Digest, has turned the tables by naming Danang Golf Club as Vietnam’s best course, with Montgomerie Links placed third behind the country’s oldest course, Dalat Palace Golf Club in the picturesque hill city of Dalat.

What makes the competition between Danang GC and Montgomerie Links especially interesting is that both courses are founding members of a new co-operative marketing group, Golf Coast Vietnam (www.golfcoastvietnam.com), formed earlier this year to promote golf tourism to Vietnam’s Central Coast region.

The two courses’ general managers, Ben Styles at Danang GC and Jon Tomlinson at Montgomerie Links, are both Australian PGA members who are strong rivals while recognising that co-operation is the best way to attract visiting international golf tourists to Vietnam’s rapidly-growing central coast region.

The competition is likely to intensify when a third course, Laguna Lang Co Golf Club, designed by six times majors’ winner, Sir Nick Faldo, opens north of Danang later this year. It, too, is a member of Golf Coast Vietnam and promises to be as good as its fellow courses.

Ben Styles this week said that being recognised by arguably the world’s most prestigious golf publication was a great honour.

“We are proud of this distinction and will continue to deliver the best course conditions in the region,” he promised. “Greg Norman designed a truly unique golf course that has been recognised officially as one of his best. This honour also shows that Danang is the best destination in the country for world class golfing facilities, with Montgomerie Links being named in Vietnam’s top three.”

Jon Tomlinson said the US Golf Digest listings illustrated the quality of golf in the Golf Coast Vietnam region.

“Reputable publications are now arguing over whether The Montgomerie Links or Danang Golf Club is better, so the only way to solve this issue is for golfers to play both courses and make up their own minds. But they should be aware that with Sir Nick Faldo’s design at Laguna Lang Co opening later this year, there will be another Golf Coast Vietnam course to make the choice even more difficult.”

Montgomerie Links, which opened in 2009, and Danang Golf Club (2010) adjoin each other on a classic stretch of duneland between Danang and the World Heritage-listed city of Hoi An. Although they share the same environment, the courses’ designers – Colin Montgomerie and Greg Norman – adopted different philosophies.

Danang Golf Club makes maximum use of the natural environment and features exposed sand dunes with large natural waste areas and few water hazards. It is one of few genuine links layouts in Asia. It is part of the Vina Capital Group, the largest asset management conglomerate in Vietnam, and adjoins Vina Capital’s Danang Beach Resort and adjoining real estate developments.

Conversely, although named Montgomerie Links, the eight times European Order of Merit winner’s course is a links-style layout rather than a true links design. Fully-grassed with minimal natural waste areas and featuring water on 14 of the 18 holes, it has a resort course feel more akin to other top golf courses in Asia.

Montgomerie Links is part of the real estate arm of IndoChina Land, which has investments in hotels, resorts, apartments and office buildings in north, central and south Vietnam.

Hyatt Regency Danang, a new five-star hotel that is part of IndoChina Land’s property portfolio and is situated in a prime position on famous My Khe beach (popularly known as China Beach), is also a Golf Coast Vietnam member.