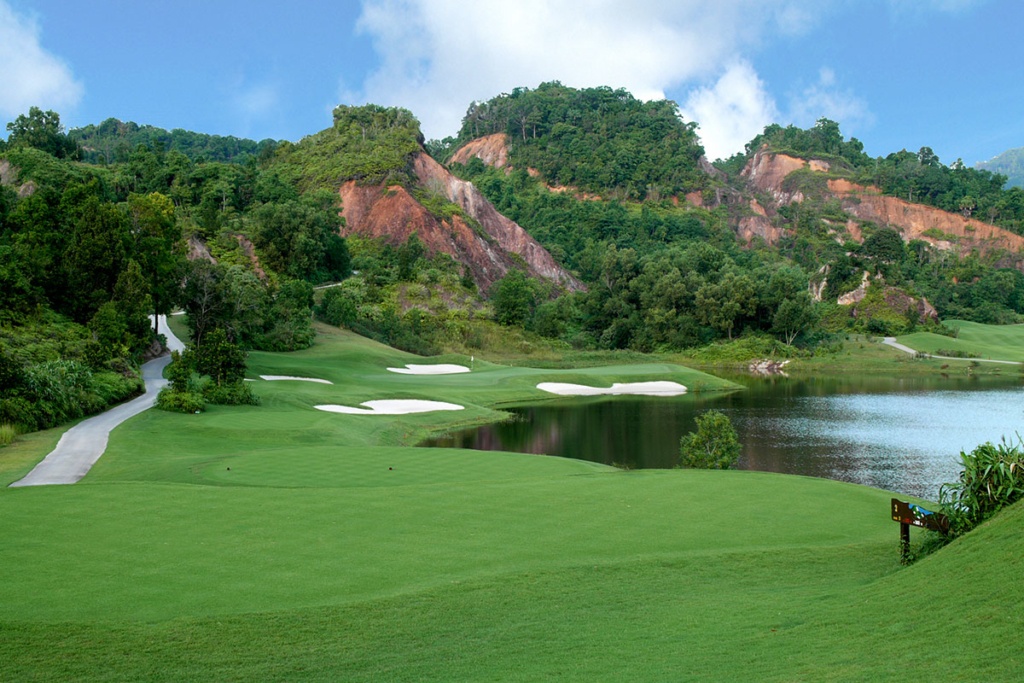 HUA HIN, Thailand (16 November 2010) – Thailand further bolstered its reputation as the epicenter of Asian golf with the early November visit of Tiger Woods, the award of The Royal Trophy to Black Mountain Golf Club, and a haul of hardware from the region’s annual golf industry conclave.
The fifth edition of the biannual Royal Trophy, the Ryder Cup style competition pitting top touring pros from the continents of Europe and Asia, has been scheduled to take place 7-9 January 2011 at Black Mountain GC, a member of ‘Golf in a Kingdom – The Thai Golf Experience‘ (www.golfinakingdom.com), the country’s leading consortium of resort courses and hotels.

The previous The Royal Trophy was claimed by the Euros, when Thai star Thongchai Jaidee’s putt on the final hole of the final match hung on the lip. This result avenged an Asian victory in 2007. Said event founder Seve Ballesteros, “The Royal Trophy is developing into one of the world’s great sporting competitions and I wish it continues to grow for many years to come.”

The same week in early November, Tiger Woods joined Paul Casey, Camilo Villegas and Jaidee in a super high-profile Skins Game at the private Amata Springs Golf Club in Bangkok. It was Woods’ first trip to the homeland of his mother, Kultida, in 10 years. The event was part of celebrations marking King Bhumibol’s 60th year on the Thai throne.

“The Thai people adore Tiger Woods because of this family connection to the country,” explained Mark Siegel, managing director of Bangkok-based tour operator Golfasian Co. Ltd, and founding member Golf in a Kingdom. “However, they must have been a bit disappointed that he shook hands with the Prime Minister instead of returning his wai, the traditional Thai greeting of palms pressed together with a head bow that is a sign of humility and respect. Not the stuff of international incident, but I bet Tiger heard it from his mom.”

Woods, accompanied by Jaidee, tried to make up for it by handing PM Abhisit a check for 2.2 million baht (some US$75,000) from Skins Game ticket sales – a donation to victims of recent floods.

Thailand has long been the preferred golf tourism venue in Asia – where golfers from across Asia-Pacific play on holiday. But as the overall focus of golf worldwide – its tournaments, its world-class talent pool, its course development – continues to shift East, Thailand has assumed an ever-larger role, especially in the tournament realm.

Black Mountain GC in coastal Hua Hin will host the Asian Tour’s Black Mountain Masters 16-19 December, while another Golf in a Kingdom member, Siam Country Club in Pattaya, entertains the world’s top women golfers at the LPGA’s season-opening Honda PTT LPGA Thailand in January, as it has the last three years.

“The tournament scene in Thailand is booming, and this growth extends fun, competitive opportunities to golf holiday-makers and members of the Bangkok corporate world alike,” said Mike Varney, general manager at Golf in a Kingdom member course Muang Kaew GC in Bangkok. Varney cited as an example the first-ever Corporate Masters played at Muang Kaew on 4 November. The event attracted more than 130 golfers in corporate teams of two, all of them playing for prizes and a chance to represent Thailand at Corporate Masters World Final at Yas Links in Abu Dhabi in December.

While Golfasian books holiday tours across Southeast Asia, Siegel emphasized that Thailand remains the foremost golf destination in Asia because of its roster of more than 250 golf courses, all but a handful of them resort courses open to public play. Golf in a Kingdom: The Thai Golf Experience gathers the best of them together and pairs them with accommodations from Marriott, Hilton and Anantara.

“The ‘Best Clubhouse in Asia-Pacific’ category was very competitive, covering the entire region and including prestigious clubs from Sentosa GC in Singapore, to Dubai Creek Golf and Yacht Club, to the winner, Bali Nirwana Golf Club,” said Banyan GC General Manager Stacey Walton. “Placing second in this category, and running up as ‘Best Golf Course in Thailand’ are fantastic achievements for Banyan Golf Club, as we’ve been operating for just two years, and for Golf in a Kingdom as a whole.”