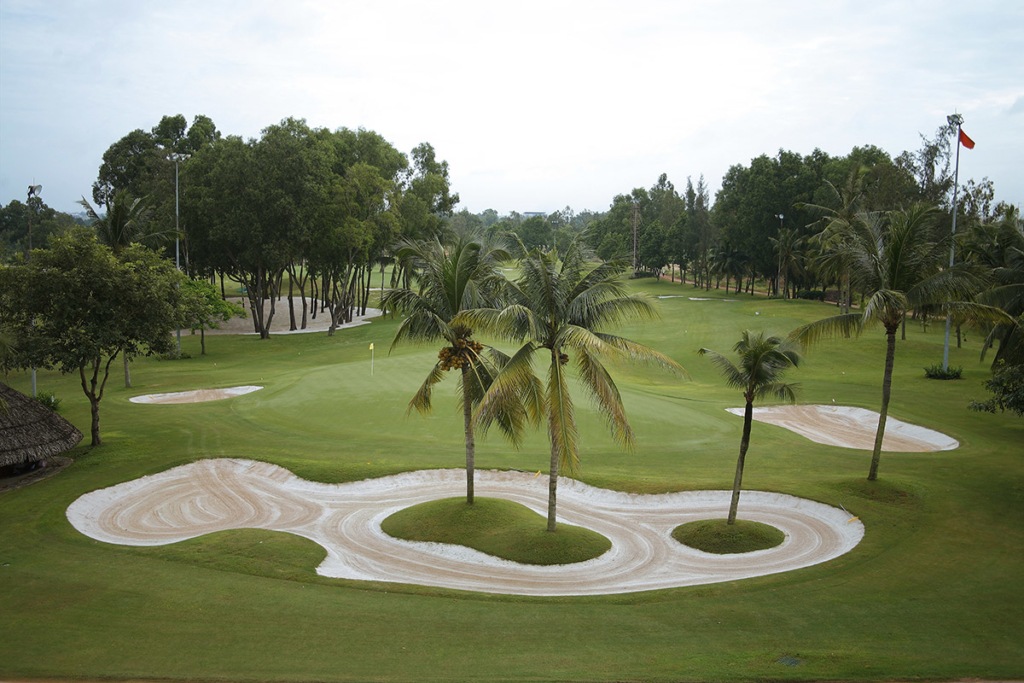 DANANG, Vietnam (February 14, 2012) — They were the fiercest of rivals on the golf course, now three greats of the modern era of golf – Colin Montgomerie, Greg Norman and Sir Nick Faldo – have come together to promote golf tourism far from their fields of battle, in Vietnam.

With their tournament playing days virtually over, each of the trio has turned his attention to other business activities, including designing world-class golf courses. Between them, they have 108 courses in play, including one each in Asia’s newest and most exciting golf destination, Vietnam’s Central Coast based on the country’s third largest city, Danang.

Each course is a member of the new Golf Coast Vietnam destination-marketing group that is seeking to attract golf tourists from regional Asian markets and further afield, especially Australia, New Zealand and western Europe.

“Vietnam’s Central Coast is the new showplace for golf,” says Jon Tomlinson, co-ordinator of the Golf Coast Vietnam group, who is also general director of The Montgomerie Links, Colin Montgomerie’s eponymous local course that opened in 2009.

“Not only do we offer the best golfing experience in Asia, but this is the only place in the world where three of the leading golfers of the modern era have put their individual stamp on courses they personally designed.”

Montgomerie Links, one of 13 courses carrying the seven times European Order of Merit winner’s moniker, was named last year for the second year in succession as Vietnam’s best golf course. In the past three years its immaculate grooming, playability and presentation have won widespread acclaim.

Right next door is Danang Golf Club’s Dunes course, designed by Greg Norman, which opened in 2010. As one of 73 Norman-designed courses in play around the world, the links layout built between sand dunes ranks among his best, and was named last year as Vietnam’s best new course.

Within the next six months, a third course – Laguna Lang Co, designed by Sir Nick Faldo – will open north of Danang. The undulating course that winds through woodlands, wetlands and rice paddy to the beach is mid-way between Danang and Hue and will join 22 other courses designed by the six-times majors winner.

The golf pedigrees of the three designers could not be better. Montgomerie, with 41 professional wins, has been a world Top 10 player, a successful Ryder Cup captain and unparalleled ambassador for golf around the world. Norman, with 88 pro victories and two British Opens, was world number one for 331 weeks – second only to Tiger Woods. Faldo, with three Masters and three British Opens, is easily England’s finest player of the modern era, with 40 pro wins and 97 weeks as world number one – third behind The Shark.

Also coming on board for the launch of Golf Coast Vietnam is the Hyatt Regency Danang Resort and Spa, an exquisite five-star beachfront property, which is close to both courses. It is Hyatt’s first resort in Vietnam and only the second Hyatt property in the country.

Jon Tomlinson says it is unusual for golf designers of the likes of Montgomerie, Norman and Faldo to be as involved in the designs of their courses as they were in Vietnam’s Central Coast.

“It shows how much potential they saw to establish great golf courses here. It is a perfect environment for golf that amazes visitors. Add the attractions of the World Heritage cities of Hoi An and Hue, both within easy reach of Danang, the My Son cultural site [also World Heritage listed], the Cham Islands, and China Beach and you have a golf tourism package that is second to none anywhere in Asia.”

Adding to the attraction of Danang is the imminent opening of a new international airport that is already attracting more direct flights into the city. Last December, Air Asia began flying direct to Danang friom Kuala Lumpur, joining Silk Air services from Singapore, and Asiana and Korean Air from Seoul. Air Asia is also expected to start flying direct from Bangkok in the near future, while there are numerous daily connections from Ho Chi Minh and Hanoi.

“Nowhere else in the world are there such high profile designers within minutes’ drive of each and perfectly placed on a picturesque beach as China Beach and quaint yet thriving tourism towns as Danang, Hoi An and Hue.

“At Danang Golf Club, golfers are tested with a true links layout, rolling through sand dunes and ultimately within yards of the shoreline on our signature 16th hole that is backdropped by the lapping ocean and Cham Islands. It offers a stark contrast to the resort style of Montgomerie Links, leaving golfers well satisfied that they have experienced two championship courses.

“Combine these two courses with the soon-to-be-opened Faldo-designed Laguna Lang Co and Ba Na Hills by Luke Donald, Danang will surely be the finest golfing destination in the region, if not globally.”

Tim Haddon, director of golf at Laguna Phuket, who is overseeing the Lang Co development, says the new course will offer a links-style feel among an interesting mix of landscapes. “It’s a reflection of Nick Faldo’s experiences around the world and combined with the other two courses in Golf Coast Vietnam will be an added bonus to golf in the region as well as the whole country.”

Golf Coast Vietnam is participating in the International Golf Tourism Association’s Asia Golf Tourism Convention at the Mines Resort and Golf Club in Kuala Lumpur from April 23-24, the world golf tourism body’s first event of its kind in Asia.